I’m trying to convert the Annotator example for an image:

to use hv.Raster instead of hv.Image, because I need the annotations in numpy/pixel coordinates.
But trying to do so, the image/raster doesn’t show. I think it might have something to do with the y-axis being inverted? I tried to use invert_yaxis=True as an opts to Raster, but to no avail. Indeed the annotate axis of the annotator inverted the y-axis as well, when I did that.
If annotation is not supported with raster, what’s my workaround, to get the coordinates in numpy index space? 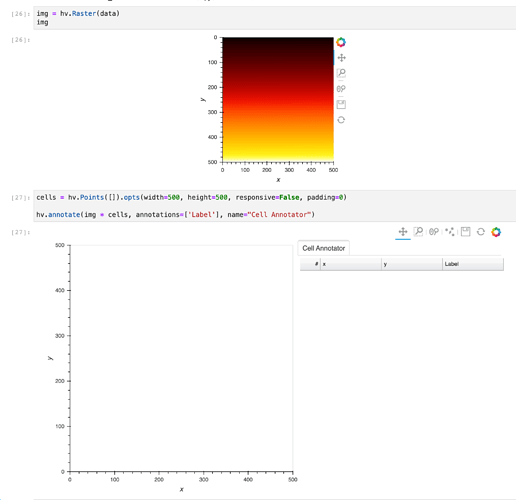 I found that doing

does work. However, I now actually need it in the opposite direction. My image data should not have the y-axis inverted (so I would use invert_yaxis=True on the raster to prevent that inversion), but then I cannot find a way to have the annotater working.