I’ve upgraded to Panel v.0.8.0. And it significantly improves the application.

Go to awesome-panel.org to try it out

And it uses the new awesome JSON pane.

Check it out at awesome-panel.org 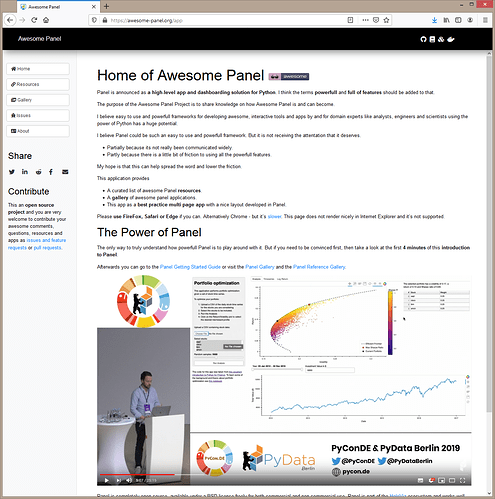 Definitely feeling snappier! On the issues list, this has been resolved:

The Bokeh server does not Support Multiprocessing in Practice

I Will try that out asap

It’s now based on a new Material Template I’ve created. With this template I think I will be able to create an application with a more modern look and feel. And with easy to use progress reporting, very fast navigation between sub-pages and some kind of messaging system (snack bar) to inform the user. I also wanted to provide a sidebar that can be used by the sub pages.

It’s still a bit preliminary though. LET ME KNOW WHAT YOU THINK! THANKS.

The vision is to be able to use the WebComponent pane I’ve contributed to Panel as soon as possible and start using material widgets for buttons, sliders, dropdowns etc.

I also want to show case the use of ECharts, ModelViewer, Perspective, Wired Widgets and all the other things I’ve been trying to contribute to Panel but are still waiting to be merged and published. I think they are awesome and is yet another super power for Panel.

One thing I also want to add is a possibility to change the theme. As a minimum to be able to select between a light and a dark theme. But the vision is any number of themes. 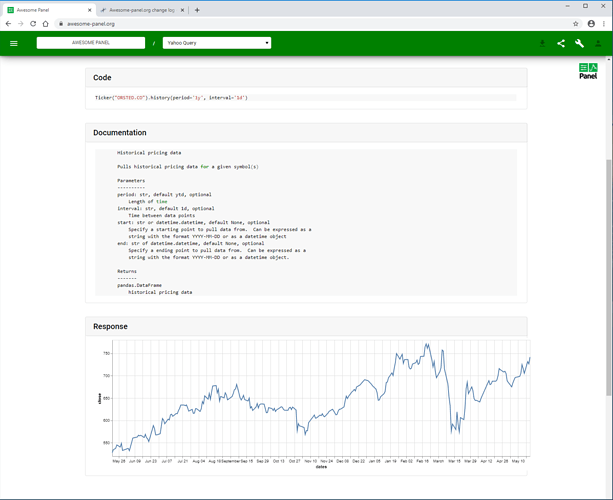 That is awesome! I’m using the golden layout still but some of the tabs are a bit small and the overall look of it doesnt really integrate well with the look of the widgets. It would be great to move everything to the Materiel template to give a more universal feel to it.

I do like the flexible layout of the ‘docker’ type layout system where the user can move graphs around and put them side by side and resize them as they please. Do you know if this kind of layout is available for materiel? I’ve been looking through the docs but the closest I could find is either Tabs or Panes, but I’d like to have a combination of both.

Created on https://plnkr.co: Helping you build the web.

Just released a little guide on setting up your @bokeh or @Panel_org project as a Bokeh extension enabling you to develop and build custom Bokeh models.

http://awesome-panel.org is now using this.

Just improved the navigation at http://awesome-panel.org.

Before it was slow. Having to navigate to gallery and then to the page you wanted.

For me the user experience is now great. I also sprinkled in a Material Design button to navigate to home.

LET ME KNOW WHAT YOU THINK.

Just added Material web components to the gallery at awesome-panel.org.

I want to demonstrate how easy it will be to plugin Webcomponents into Panel using Python only when the upcoming WebComponent is released. 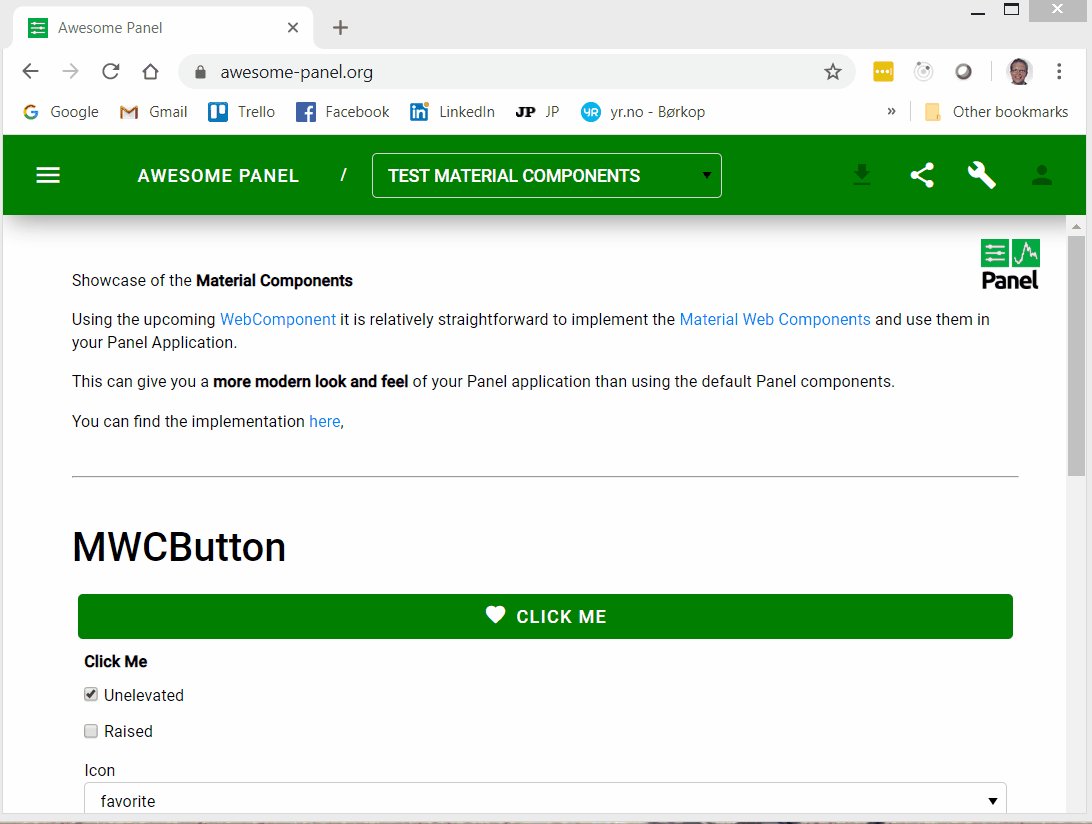 Just added @materialdesign web components to the gallery at https://t.co/FlF2P0RDCL. I want to demonstrate how easy it will be to plugin Webcomponents into @Panel_org using #Python only when the upcoming WebComponent is released. @Panel_org. Analytics apps with POWER. https://t.co/9kHbWHtpsC
1 Like
Marc May 25, 2020, 5:47am #27

I have just added the PerspectiveViewer to the Gallery at awesome-panel.org. Its built on top of the upcoming WebComponent.

Just added an example of using ECharts (and PyeCharts) with Panel to the gallery at awesome-panel.org. The plotting library is really fast and uses transformations. Nice.

I’ve added an example of using the Google Model Viewer with Panel.

Added an example of using asynchronous tasks with Panel originally developed by @Jhsmit.

This app is heavily inspired by the dash-detr app.

I hope this provides you with an impression of how this can be implemented using Panel.

Check it out at awesome-panel.org.

(I’m running this on low-end hardware on Azure so the performance is not that impressive. Its 5 times faster on my laptop.). 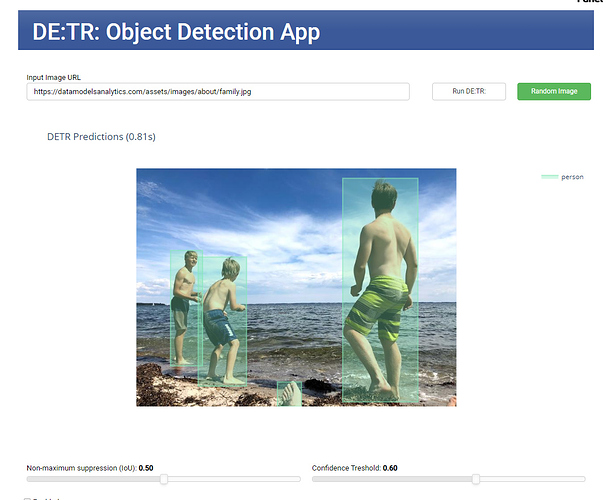 I’ve added an example of using the Pandas Profiling Report with Panel to awesome-panel.org

I’ve also offered to contribute it to the Gallery of panel.holoviz.org. See https://github.com/holoviz/panel/issues/1465#issuecomment-653846184

Please upvote if you would like it added as a notebook example. And feel free to suggest improvements.

If you like this example and think Panel deserves a little attention feel free to retweet https://twitter.com/MarcSkovMadsen/status/1279652651697930240?s=20

I.e. awesome-panel.org is now running in 4 processes and should provide a better experience when more users are using it.

Added Color Distortions app by @mycarta to the Awesome List 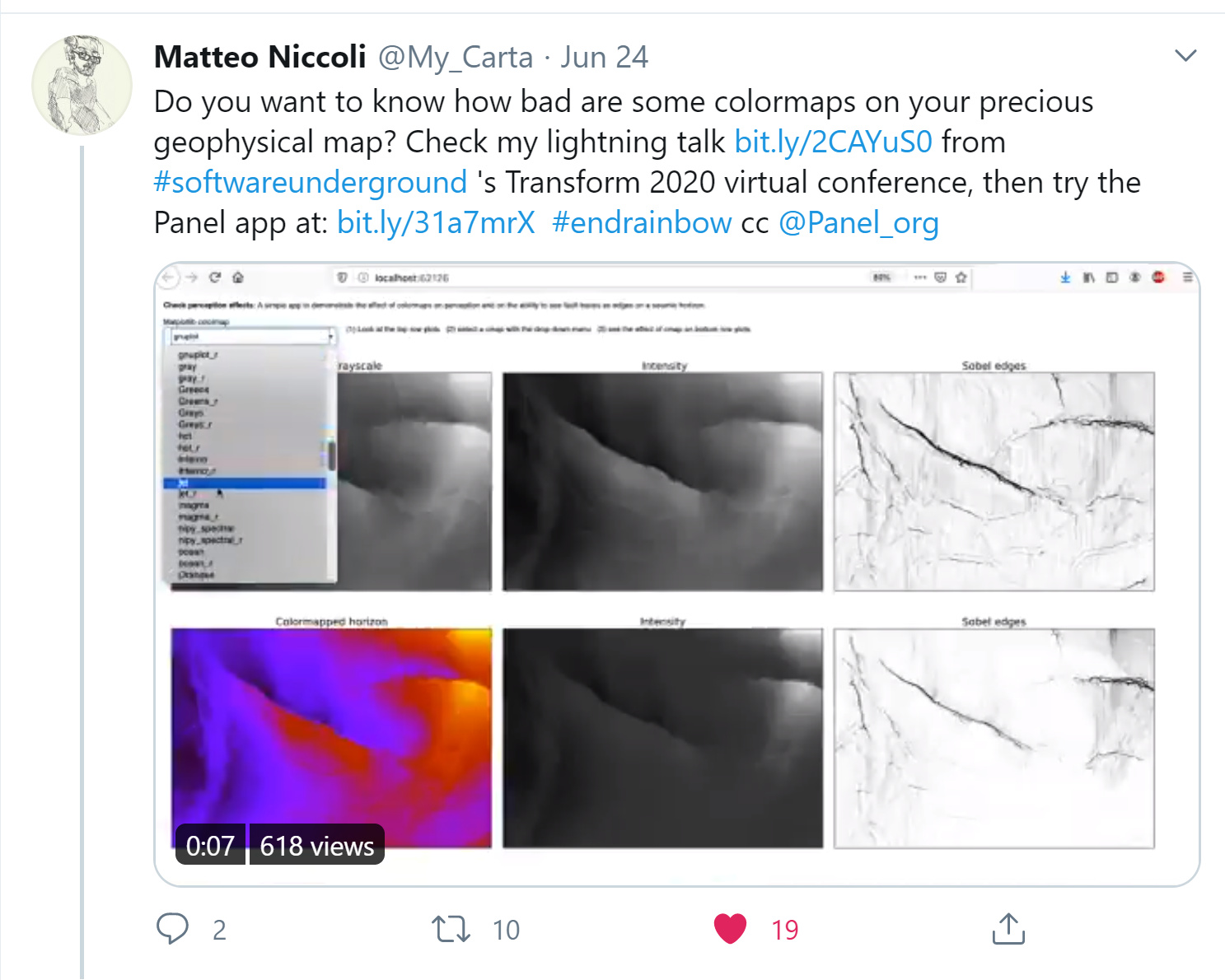 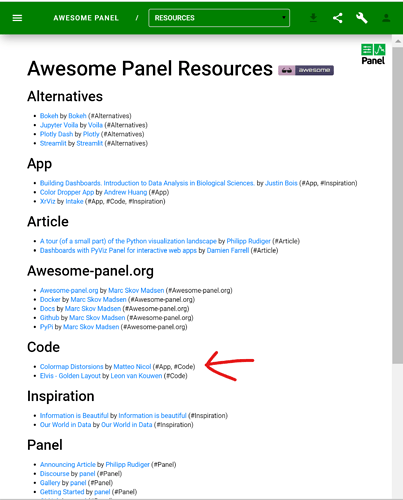 You can get your awesome Panel resource added as well. Just file your request as a Feature or Pull request at https://github.com/marcskovmadsen/awesome-panel