I looked here: http://holoviews.org/reference/elements/bokeh/Spikes.html and in hv.help(hv.Spikes) but I cannot find a good explanation of how to use spikes for horizontal lines.

How can I do that?

The trick is then to put the column you want on the y_axis first on the x_axis and then later invert the axis.

Don’t know if there’s a way to just specify to which axes the spikes should be added. But I would say most use cases would be with timelines on the x-axis and less with the y-axis. 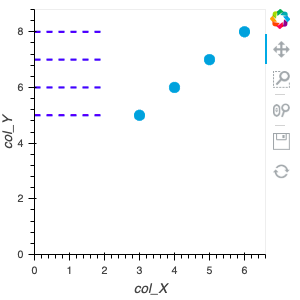