We have found that ‘prefix’ in panel.serve causes problems when trying to run apps at a subfolder URL behind a reverse proxy. Or it is possible there is some extra configuration in the Bokeh server that I haven’t been able to find…

Let’s say I have a panelscript.py to run a simple Panel server:

If I run this with python3 panelscript.py then I can access the apps fine at localhost:5006/ as expected, including the default Panel index_html page, linking to /app1 and /app2: 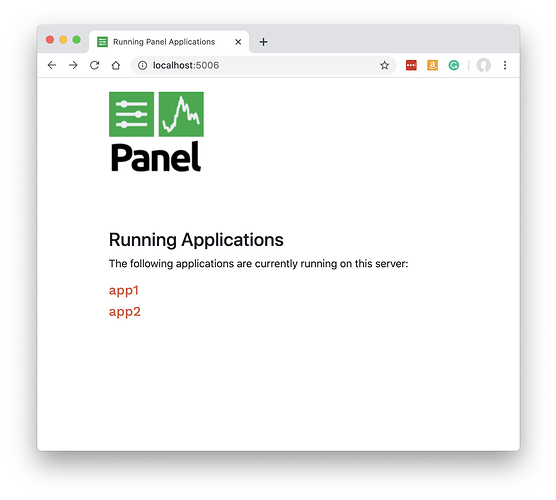 The problem I’m about to describe was encountered within a JupyterHub environment where each user’s server is at a sub-folder URL, so we can borrow some components from JupyterHub to set up a simple reverse proxy.

So maybe I’m supposed to supply a prefix to panel.serve, adding the following just before pn.serve:

The index_html template could be fixed by changing to relative URLs (’.’ instead of ‘{{ prefix }}’ in the template), although I don’t know if that could upset anything else.

Or is there some server configuration that allows me to separate out server-side and user-facing prefixes?

For example in Voila, I can run it like this:

meaning that the server itself should serve at the root URL ‘/’ as normal, but any user-facing URLs, e.g. within HTML, should be written with the prefix /subfolder.

This example has emerged from @Marc experimenting with deployment of Panel through ContainDS Dashboards, a method of leveraging your JupyterHub to serve non-Jupyter web apps to authenticated users on your JupyterHub. The GitHub issue is here.