Vega and VegaLite don’t play nice in pn.Column and pn.Row: they don’t bump the other panes resulting in overlapping panes. 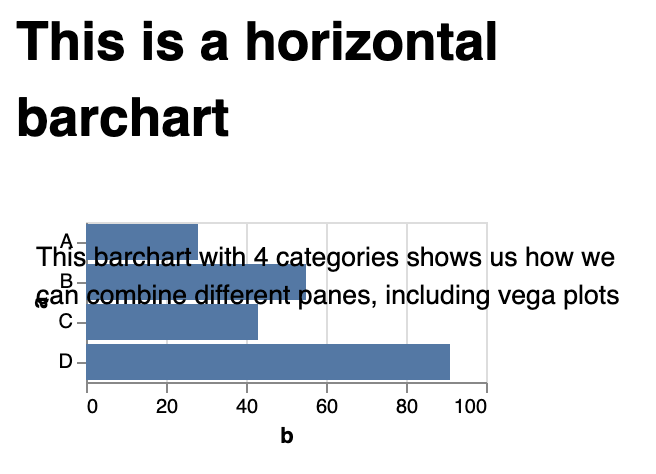 The same is true when I want to create two vega plots next to each other (e.g. just repeating the pn.pane.Vega(spec) in the code block above).

This is probably also the reason why I need to use the .show() in the example. If I don’t, the output is not shown entirely and the next code cell hides it, like this:

As you can see, only part of the image is shown. I suspect that this has to do with the same bounding box issue.

Maybe its the markdown which is the problem. I have several of those issues on Github.

I do think it’s the vega and not markdown, because:

BTW: This work is to be integrated in a vegalite/vega/holoviz tutorial that I’m writing for several courses and workshops. The current version is at http://vda-lab.be/visualisation-tutorial. Still a lot of work to be done for holoviz, but I’ll get there… It’s in writing these tutorials that I came across these issues

Sadly I’m still seeing this issue on master. The problem is that without an explicit width, height declared as part of the spec neither Panel nor Bokeh can figure out the size of the object.

If you add a width and height to the spec it seems to work okay:

Indeed that works; should have tried that as well… Thanks Philip